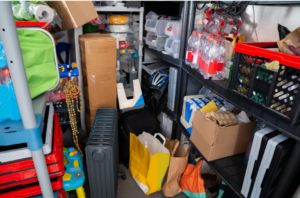 I am a bit of a hoarder. I have kept so much from my past it’s unreal – old certificates from school, old books from school, favourite toys, all letters I have ever been sent. Then of course, I have hoarded all my children’s old stuff. I also keep paper – lots and lots of paperwork. This week it came to a head when I realised that in terms of storage space, we could no longer cram another thing into the shed, the garage or any of the cupboards. The house gives the impression of minimalism and tidiness but behind closed doors, there was so much old stuff crammed into corners that every time I opened a cupboard, things would come spilling out, slowing me down and causing me frustration.

Until recently, I hadn’t really given this much thought. It’s normal to have lots of stuff, right? But then over the summer, I did a course which raised some quite interesting (and highly uncomfortable) questions. The course was about mindset around money, so I booked on, thinking that it would be useful to have a good mindset around money at the time of launching a new business.

But it turned out to be about so much more than just money. I was encouraged to delve back into my past and look at messages I absorbed as a child about money and “stuff” and identify limiting beliefs and core values. This is classic NLP, yet I had never applied these ideas to my thoughts around hoarding things.  It was difficult and uncomfortable, but I’m so glad I did it.

It made me realise that my home has been very much a reflection of my mind. On the surface, my mind is really organised but crammed in the dark corners was a lot of “stuff” (limiting beliefs, guilt, fear about the future, fear of letting go of the past), which was slowing me down, causing me frustration and preventing me from living the life I really want.

For me, fear was at the root of most of my hoarding: fear that if I threw things away, I might lose the memories; fear of  needing to “prove” something to somebody (hence the crazy amounts of paperwork!); fear of not having enough money in the future to replace items; fear of not being “enough” generally.

So this week, I began to sort it all out room by room and I was genuinely shocked by how much baggage I had carted around with me since the age of 18 (particularly given the number of times I’ve moved house!)

I held up each item and asked myself whether it still served me. Interestingly, I found that so much of it did the opposite – it actually held me back from being the best version of myself. There were clothes, which were ill-fitting, but I kept anyway out of guilt for having never worn them. There were crates of paperwork from previous jobs I no longer do. There were books which I have read but have no intention of ever reading again. But more than anything, there were crates of random things from childhood that I had kept for so long, I felt that I “should” hold on to them. That word “should” is just so loaded with guilt.

I have sifted through each item and only kept the things which bring me joy. But I have to admit that the greatest joy comes from the knowledge that I don’t need all this stuff (either the physical things or the emotional baggage I have been carrying alongside them). I am excited about the next phase of my life.

NLP teaches that we all have the resources within us to achieve anything we want to achieve. We don’t need anything external to “prove” this.

The greatest lesson I have taken from this, however, is that I want to teach my kids to let go of the past, let go of expectation, let go of guilt and keep their minds firmly in the present moment – that’s where the true joy is.