Why is your Teen really Procrastinating? 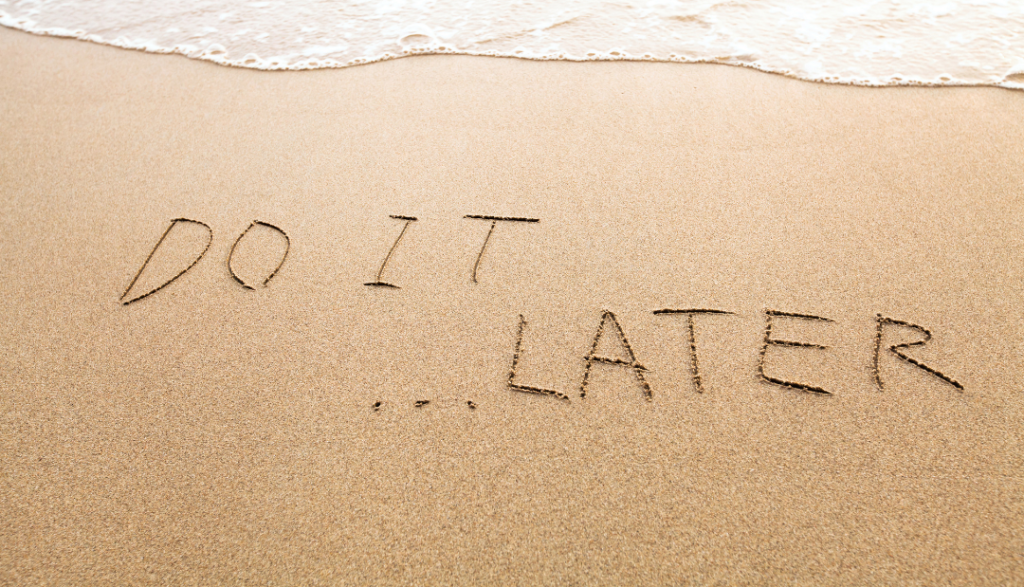 We’ve all had that argument with our teens, haven’t we? That one where it gets to Sunday night and your teen suddenly declares that a History project, which they have had 3 weeks to work on, is due in tomorrow. Teenager procrastination is frustrating.

One of my children used to be the queen bee of procrastination. I can honestly say though that since we have started using some of these techniques, she genuinely procrastinates less (notice that I didn’t say never – she is still a teenager, after all).

This one is not just for teenager procrastination  though – I have also started using some of the techniques to deal with my own tendency to procrastinate in my business and have found them to be really effective.

REMEMBER THAT EVERY BEHAVIOUR HAS A POSITIVE INTENTION

This is an important belief in the world of NLP and one that I have found to be a game-changer when working with teenager procrastination. They often get a bad press – “he’s lazy,” “she doesn’t care about her exams,” “he only ever wants to play on his Xbox.”

To be fair though, isn’t this the same for all of us? I’ve lost count of the times I’ve decided to sit and do my tax return or write a blog post and ended up doing something “essential” like tidying my bookshelf or scrubbing out the fridge instead. It’s natural human behaviour. We want to feel good NOW and so we gravitate towards activities which make us feel good in the moment. Then when we feel good, we will naturally feel more positive and confident and convince ourselves that putting off that task just one more day really isn’t that much of a problem.

Just recognising that the behaviour has a positive intention can help us to move forward rather than spend all our time beating ourselves up about it and feeling guilty.

REMEMBER THAT A TEEN’S BRAIN IS NOT YET FULLY DEVELOPED

Another reason why it can be hard for us to understand why our teens procrastinate is because the pre-frontal cortex (the part of the brain that is in charge of reasoning and planning) does not fully develop until around the age of 25. Therefore, as adults, we have a greater capacity to reason and plan than our teens yet have. Often at this age, their amygdala (the part of the brain in charge of the fight and flight response) will completely take over, making it even harder for them to engage the reasoning part of their brain. This is why they will sometimes completely “flip their lid” when we challenge them about why they haven’t done their homework.

Your teen will probably have no more idea why they are procrastinating than you do, so asking them “why…?” is often futile and this is sometimes what leads to the arguments.

At the root of teenager procrastination will be an emotion – upset, sadness, fear, boredom, resentment, anxiety or frustration. Ask them instead what it is that they are REALLY trying to avoid.

Once your teen recognises this emotion and names it, it can often be quickly and easily released. If your teen needs help with identifying what is at the root of their procrastination, I can help. Click here for more information.

TRY NOT TO GO STRAIGHT INTO PROBLEM-SOLVING MODE

As parents, we naturally want to “fix” our children’s problems. I have been really guilty of this – jumping straight into creating a “study timetable” for them and working out how we can get it all caught up. This can in fact make the problem worse as the teen then loses even more of their influence over their own destiny and can sometimes use procrastination as a way to gain control over their independence by just outright refusing to do as they are told.

It’s often far better to offer sympathy and understanding for what has happened and ask them how you can support them in catching up.

ASK: WHAT IS THE NEXT ACTION?

This is my favourite technique. I have it taped to the wall in my office.

A study timetable or a to-do list can simply be too overwhelming for some teens. However, asking them this question will often be enough.

The next action might just be to get out their textbook. That’s ok. It’s a start. Often, when we get started the task is nowhere near as bad as we thought it would be.

If we keep asking ourselves this question and completing only the next action, before we know it, the task could be complete.

I can offer one-off sessions to help with motivation or study skills. One session can often be enough to get help your teen recognise what is at the root of their delaying tactics, enabling them to move forward. Click here for more information.